Sukuk represented 11.8% share vs. conventional in Indonesia and 54.6% in Malaysia

In Southeast Asia, total G3 currency bond issues (bonds issued in US dollars, yen and euros) were valued at USD23.3 billion over the January–July period, down 15.1% from the same period in the previous year. Indonesia posted USD11.1 billion worth of G3 issuance, of which about 63% comprised sovereign G3 currency bond sales and about 32% was USD-denominated foreign exchange bills issued by the central bank.

Malaysia’s issuance of USD3.8 billion, reflecting a 51.0% y-o-y decline, largely came from the USD1.5 billion dual-tranche, USD-denominated sukuk sale of the central government in April and USD897 billion worth of bonds from Maybank. 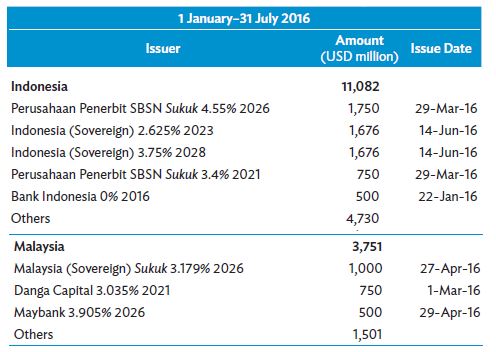 The LCY bond market in Indonesia reached a size of IDR2,003.0 trillion (USD152 billion) at the end of June, climbing 5.2% q-o-q and 20.1% y-o-y in Q2 2016. Growth was driven by increases in both government and corporate bonds. Conventional bonds accounted for the largest component of the aggregate bond stock with an 88.2% share of the total at the end of June. Sukuk represented an 11.8% share. 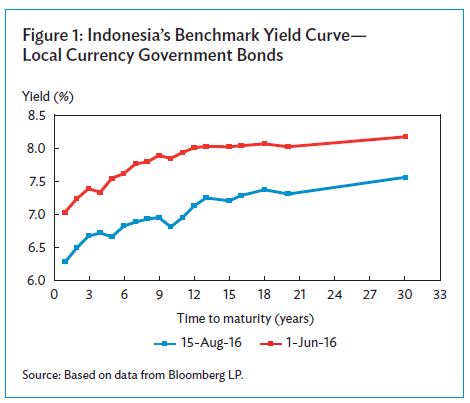 Domestic investors began shoring up their government bond portfolios following a regulation passed by Otoritas Jasa Keuangan earlier this year requiring insurance companies and pension funds to hold 20% of their portfolio in government bonds (conventional and sukuk) in 2016 and 30% in 2017.

In Q2 2016, central government bond issuance stood at IDR118.3 trillion, down 26.1% q-o-q but up 32.8% y-o-y. On a q-o-q basis, issuance slowed due to the base effects generated by the high level of retail sukuk issuance in Q1 2016. New bond issuance in Q2 2016 comprised the government’s weekly auctions of conventional and Islamic Treasury instruments. All seven auctions of Islamic bills and project-based sukuk during the quarter were awarded either in full or above target.

Corporate Bonds – A total of 47 bond series were issued during the quarter, all of which were conventional bonds except for Maybank Indonesia’s issuance of sukuk mudharabah (profit-sharing bonds).

Malaysia is home to the largest Islamic finance industry globally and leads the sukuk market in emerging East Asia. It is also the only market in the region where sukuk account for a majority share of the LCY bond market at 54.6%. Among government bonds, 40.4% comprise sukuk, while the corporate bond market is dominated by sukuk with a 72.2% share.

Size and Composition of the Local Currency Bond Market in Malaysia

Issuance of corporate bonds increased slightly to MYR34.1 billion in Q2 2016 from MYR33.5 billion in Q1 2016. Sukuk issuance continued to exceed that of conventional bonds, with their share of total issuance rising to 58.9% at the end of June from 55.4% at the end of March.

By type of financial instrument, Islamic medium-term notes had the highest share of total issuance at 43.2%, followed by conventional commercial paper with a share of 25.7%.