How to Build the Industry’s Global Centre

Which of the existing Islamic finance hubs will emerge as the preeminent global centre for Islamic Finance? The prize remains up for grabs with none of the current hubs in the Middle East and South East Asia able to achieve the critical mass to move from a domestic to regional centre, and then upwards into a global Islamic finance centre.

These current hubs can be characterised as domestic markets lacking international outlooks, relationships and large banks with cross regional reach. A lack of regulatory confidence as well the perception of political interference is not inspiring foreign issuers to raise capital through them.

The leading conventional financial centres of London and New York emerged when a critical mass of firms and people began to locate into them thereby allowing them to move from already established regional hubs into global centres. This process is known as clustering, something which thus far no Islamic finance hub, with the exception of London (which does not seek the global centre title preferring to be positioned as the leading Western Centre for Islamic finance) has been able to re-create.

Clustering allows for the development of the full eco-system of fund raising and fund management, as well as knowledge services (research), support services (law and taxation), risk management (derivatives and insurance) and crucially deeply liquid primary and secondary markets denominated in a range of global currencies. 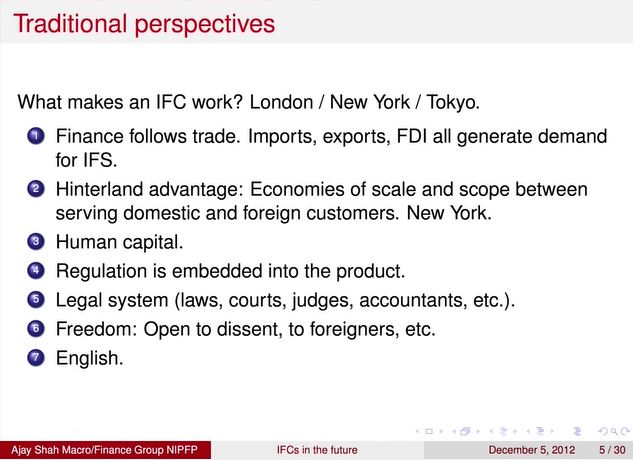 Crucially Shah highlights Tokyo’s failure to develop as an international centre stating it was caused by it not being comfortable with criticism as well as lacking a trusted legal and regulatory system. Aspiring Islamic finance centres would be well advised to learn from Tokyo’s failure.

The lack of a global Islamic finance centre is hampering the growth of the industry by hindering product innovation, market liquidity thus dampening the growth of retail markets and primary and secondary capital markets demand.

Kuala Lumpur to date has been the leading centre for Islamic finance, but has failed to achieve critical mass and it remains to be seen what damage corruption allegations around misuse of funds for a Sukuk issued by 1MDB have upon its reputation.

Despite this it still leads on many fronts including in innovation, the use of cross border Sharia compliant transactions in its currency as well as being home to a number of global Islamic finance regulatory bodies and can no doubt up its game further.

Longer term Kuala Lumpur will be challenged by hubs which have access to deeper pools of capital as well as access to bigger markets. These hubs include Jakarta, Riyadh, Dubai, Bahrain, Istanbul, Hong Kong, Luxembourg, Dublin and London with each bringing its own advantages to the table.

The Key Stages of Development

Finance centres compete on different factors and size is not necessarily an advantage. Common areas of strength present in the conventional space which any aspiring Islamic finance centre would need to replicate include free movement of funds, a strong domestic currency, transparency and independence of the legal system from political interference.

Ambitious Islamic finance hubs can learn much from London, which being the world’s leading financial centre maintains leadership in a number commonly cited criteria for financial centre development.

The above video identifies six key characteristics of building a modern financial centre.

Currently different hubs of Islamic finance meet some of the required characteristics, but none (apart from London) stands out as meeting all of the requirements.

Dubai and Kuala Lumpur lead in ease of relocation of qualified specialists, whilst no hub from the perspective of international corporates looking for securitisation is able to stand out as having a legal system which inspires confidence (most Islamic financial contracts use English Law). Saudi Arabia would no doubt lead in the depth of the liquidity of its financial market, whilst Luxembourg‘s strength is at the centre of Europe and the Eurozone currency union.

Muazaffar Hisham, CEO of Maybank Islamic Banking highlighted at the WIEF 2013 forum, financial market development within the context of the Malaysian experience. Each of the points he states, map to one of the key six characteristics for financial centre development. Tax neutrality and sovereign sukuk form part of the financial market infrastructure, whilst regulation and opening up the investor base are components of building a business friendly environment.

The key stage of development is the occurrence of clustering; where a critical mass of businesses are attracted to the centre consisting of varied financial participants such as consultancy, legal, research, broking, accountancy and audit. Deep market liquidity is developed from a wide range of international financial firms.

The greater the pool of human talent the more chance of new firms entering the location. For example auditing firms tend to follow accountancy firms, brokerages follow banks, and banks follow the issuers. As more and more firms enter the market, a clustering effect is created.

Of the current hubs in the Gulf we can observe the challenge is to encourage greater cross border activity. Sukuk originating in Dubai tend to be arranged by UAE banks and listed on its domestic exchanges, whilst those arranged in Saudi Arabia, Qatar and Bahrain follow the same domestic orientated path.

Hubs with large pools of human capital and lower costs of labour can lead in the offering of specialised services, similar to what Mumbai offers in the conventional space. Jakarta for example can leverage off its existing Islamic financial human capital and offer specialised services such as software development, data centre services, algorithmic trading, research and insurance claim processing.

An Islamic mega bank active across borders equivalent to what HSBC is to the conventional space and operating in retail and capital markets will do much to act as a catalyst to boost the credentials of any hub where it is domiciled by giving credibility to the regulatory framework it operates under, as well as much needed liquidity.

Currently Islamic banking assets are centred around six core markets of Qatar, Indonesia, Saudi Arabia, Malaysia, UAE and Turkey, and are on course to touch US$1.8t by 2019. The world’s biggest Islamic bank is Al Rajhi, which according to data from the IslamicFinance.com Islamic Bank ranking chart has assets of US$62 billion (2015) whilst Saudi based National Commercial Bank is likely to exceed this once it has completed its transition to becoming a fully-fledged Sharia compliant bank. Both banks though are Saudi focused, with no cross border activity. 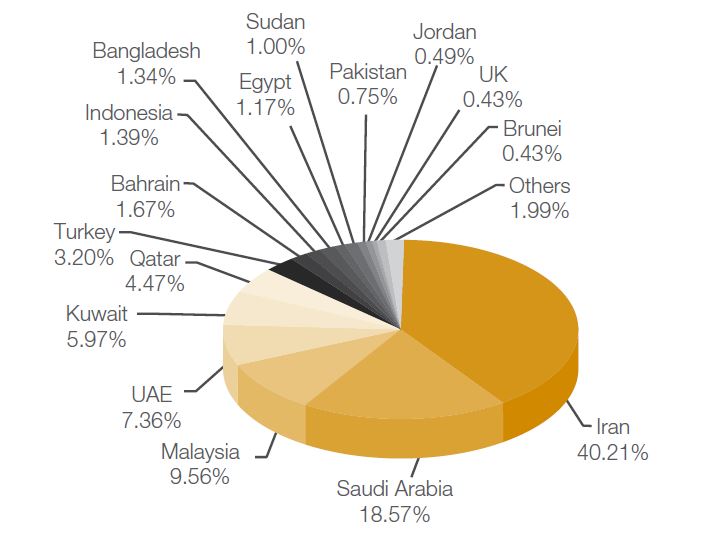 In the capital markets space, British banks HSBC and Standard Chartered dominate, though Dubai based Emirates NBD is becoming increasingly involved as a cross border market player having arranged Sukuk in Turkey and Indonesia.

Ajay Shah highlights the need for the jurisdiction to maintain a strong currency and in particular for the currency to be considered as a global reserve currency. The below image from his presentation presents global shares of the leading currencies. 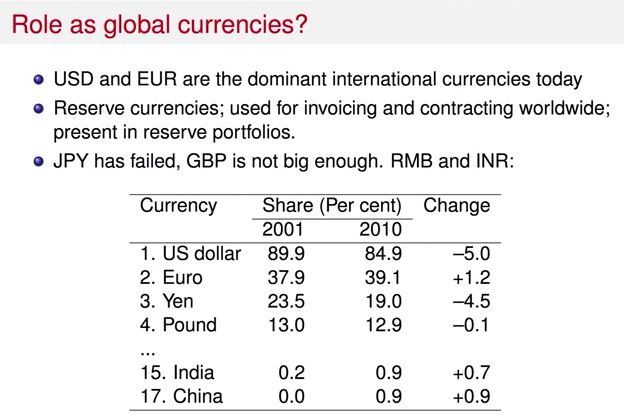 None of the current Islamic finance hubs located in the Middle East and South East Asia have currencies considered to be global reserve status. Furthermore critical to the development of primary and secondary markets, any aspiring hub would need to allow for a floating exchange rate which would involve the de-tangling of pegged or loosely linked exchange rates against the US dollar.

What about Islamic Economic Values?

“They who hoard up gold and silver and spend it not in the way of Allah, unto them give tidings (O Muhammad) of a painful doom.” [Al-Tauba: 34]

Surely, any prospective Islamic financial centre should display some values consistent with the principles of Islamic economics and justice. A discussion of the Islamic economic value system is beyond the scope of this article, but a quick glance at prospective centres demonstrates issues pertaining to labour rights and the hording of wealth.

Prophet Muhammad, peace be upon him, said: “Pay the labourer before the sweat on his brow dries.” We should take a lesson from the words of our beloved Prophet.